The GBP went from strength to weakness and then partially back to strength again yesterday on the crossfire of conflicting news stories. The recent bounce in sterling was on the softening tone domestically on Boris Johnson’s Brexit Bill. Then a sterling sell-off materialized in the wake of the Bank of England meeting recently, when the bank made it clear that was conferring with regulators on the practical requirements for the implementation of negative rates, even if it signaled that it was happy with where rates are at present. The news saw a 2-year swaps price as much as 5 basis points lower and the forward expectations are now for a BoE policy rate of -0.1%. Likely more important for sterling than negative rates is whether the UK can hammer out a post-Brexit transition trade deal on reasonable terms with the EU, and on that front, we suddenly saw the first set of positive headlines in a long while.
The UK side called the latest informal talks “useful” and the EU’s Von Der Leyen told the FT that she is convinced a deal can be done. NIRP is only profoundly negative if the immediate trigger is hard Brexit terms, while less so if it is because the UK economy is merely following other economies into a new phase of weak Crude oil found a bid following the recent sharp correction and break below the trend that had prevailed since June. Driving the recovery has been upbeat economic data from China and the U.S., the world's biggest consumers, along with a general improvement in the risk appetite after U.S. mega-cap stocks found support.

Commodities
Most important last week was the strong verbal intervention given by Saudi Energy Minister Prince Abdulaziz bin Salman, following the OPEC+ meeting. He opened the meeting with a forceful condemnation of members that try to get away with pumping too much crude.
Potentially a sign of frustration that OPEC+ production cuts have yet to deliver a strong recovery. The minister was probably also trying to prevent increased short selling amid what the IEA, OPEC, and BP call a fragile demand recovery at a time of very high spare capacity and inventories. Since July when fundamentals, but not the price, started to weaken the gross short held by hedge funds in WTI and Brent crude oil has more than doubled to 235 million barrels.
While short-sellers may move the market for a short period, fundamentals will always be the main driver. While the recent 15% correction in Brent crude oil helped to bring the price more in line with current fundamentals, a recovery from here needs more than verbal intervention, despite it coming from the world’s biggest producer on second-round virus risks. 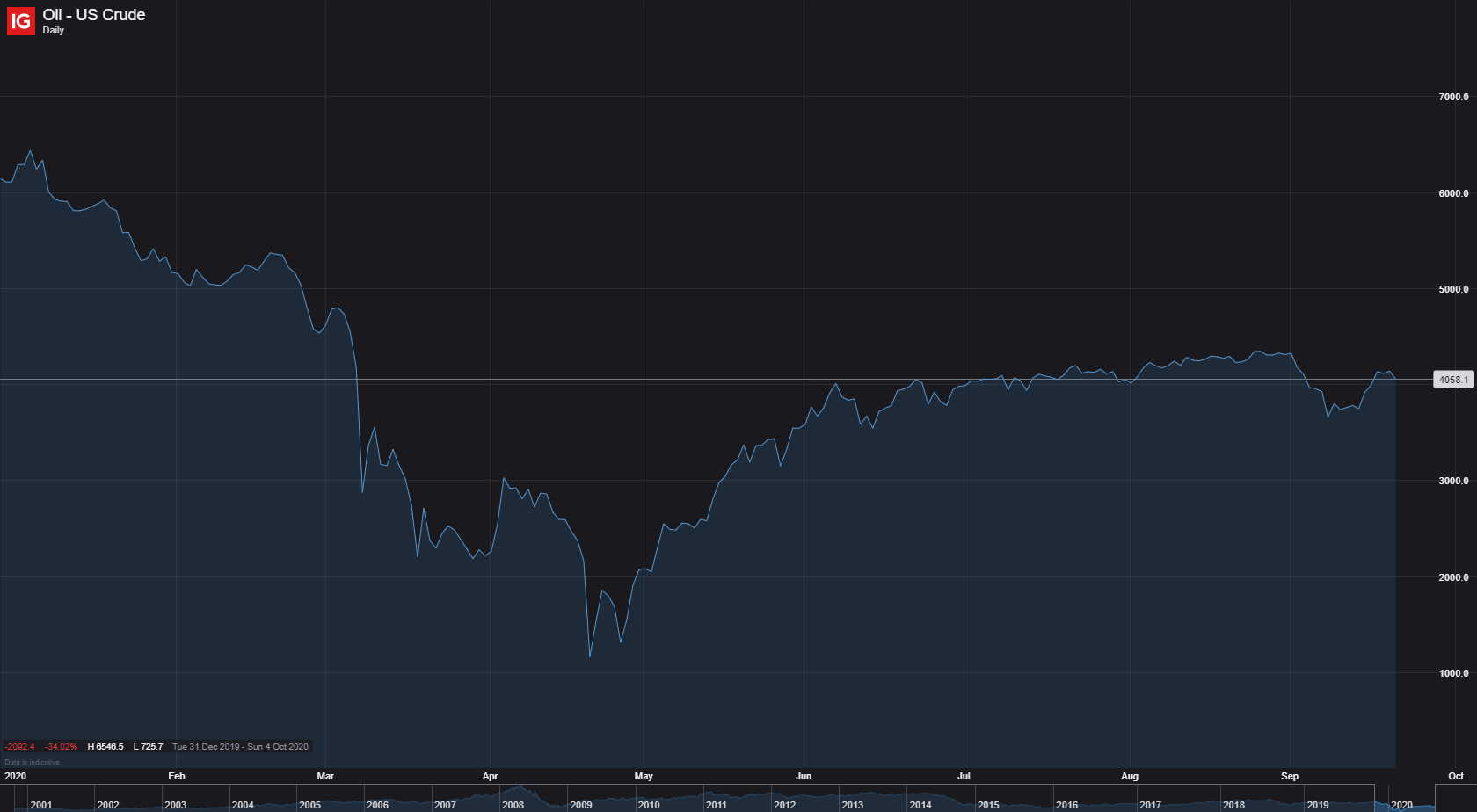 Gold and Silver were traded slightly higher last week, despite some midweek softness after the FOMC delivered nothing new and U.S. stocks challenged support. The Fed has promised rock-bottom rates for longer than three years. The initial cross-market reaction with lower stocks and a stronger dollar raised some concerns that the Fed’s toolbox has started to look empty, with the element of surprise no longer there.

The lack of fresh input from bonds and the dollar has meant that algorithmic trading systems, often trading correlations between markets, have moved to the driving seat, thereby creating an unusually positive correlation between gold and stocks. Correlations work as a trading strategy to a point. The very short-term direction may be dictated by the stock market.

The combination of inflation protection attracting demand, the positive views on when a vaccine against Covid-19, and the outlook for a weaker dollar will become available are all too optimistic. With these developments in mind and the potential for a very difficult U.S. election period ahead, we see a long-term bullish outlook for gold. Meanwhile, in the short term, the performance of U.S. mega-caps and the dollar hold the key to the direction. As a result, it is likely to see the two-month consolidation period being extended further. 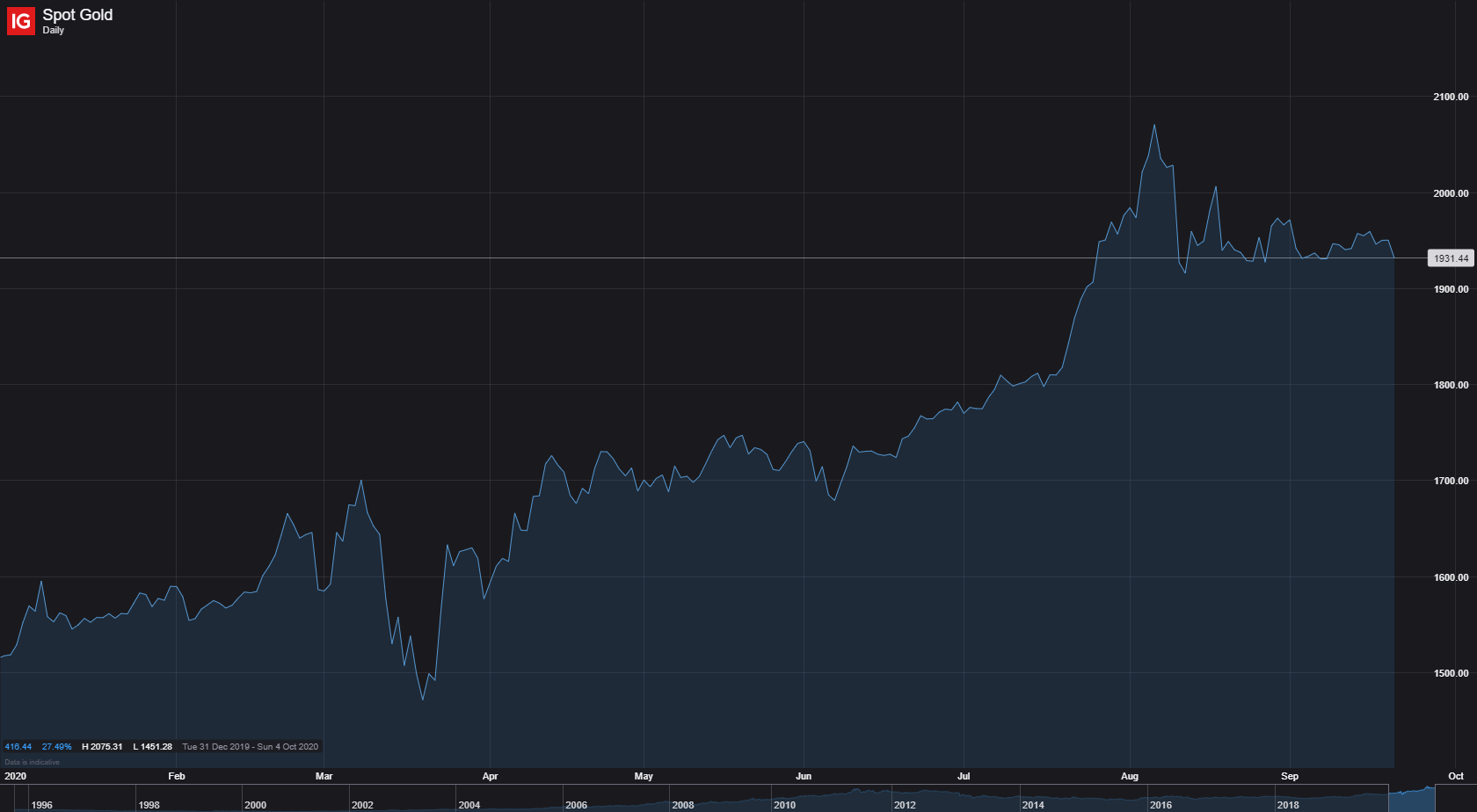